The first settlers to Horseheads, former Revolutionary War soldiers who had seen the area during the Sullivan campaign, developed a primitive school. The early education facilities were log cabins and one room schoolhouses. In the early 1800s, small schoolhouses were constructed across the community. In 1815, a two-story community building was built at what is now Teal Park, with the first floor used for school and church purposes. In 1850, a four-room school was built next to this original building and served the community for the next 42 years. 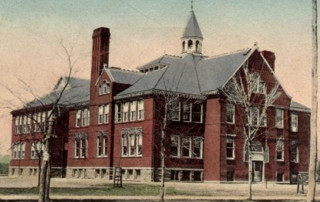 A Union Free School was organized in Horseheads in 1865. The first recorded graduation took place in 1885, with Board of Education President Benjamin Westlake presenting completion certificates to Harriet Armitage, Vena Barlow, Joyce Johnson, Nita McNeish, Maude Ward, and John Curtis. By 1889, the district had 200 students, one principal, and seven teachers.

On April 27, 1950, residents of Horseheads and surrounding communities approved a plan to consolidate area school districts into one, known as the Horseheads Central School District. The consolidation included 36 districts, many comprised of simply a one-room schoolhouse, creating what was then the third largest central school district in the state.

The baby boom, new housing construction in the years following World War II, and the resulting increased enrollment prompted the consolidation efforts in Horseheads. The vote was held on April 27, 1950, and the new school district officially started on July 1. In 1952, voters approved a $2.8 million bond issue to build new schools to meet the needs of the increasing population.

In September 1952, the district served 3300 students. All elementary students from the Village of Horseheads attended a two-story brick school built in 1892 adjacent to the present High School. This school, later known as the Annex, once held all twelve grades and was a teacher training school after hours. The building was torn down in 1987.

Junior high and high school students attended a two-story brick building nearby. It was known as the East Wing or the "old building" of the present High School until its demolition in 1988. The site is now a park entrance to the High School.

Elementary students outside of the village attended small schools in Big Flats, Millport, Breesport, and Erin. As the bond project allowed for the building of new schools, these small schools were sold. Some still exist today as private homes.

In 1954, voters approved the building of three elementary schools, an addition to the Breesport school, and a cafeteria and new gym for the High School. During the first half of the 1954-55 school year, some Big Flats students went to class in a rented house and had music and gym classes in the Presbyterian Church. They moved into their new school after spring vacation in 1955.

Center Street and Ridge Road schools opened in 1954 as well. Prior to that, some students went to school in an abandoned office building at the Holding Point in Horseheads.

In 1958, additional classrooms and the auditorium were added to the High School. In 1958, Broad Street Elementary opened. In 1960, additions were added to Center Street, Ridge Road, and Big Flats.

In 1966, Gardner Road Elementary School was built to accommodate a growing development on both sides of Westinghouse Road known as Windsor Gardens. That same year Big Flats took on its second addition.

In 1969, as elementary enrollment slowed and junior high enrollment grew, Junior High West was completed on Sing Sing Road for half the students in grades 7 to 9. The building boasted the largest gym facility in the area, with seating for 2800. Today, the school houses seventh- and eighth-graders and is now Horseheads Middle School. In 1970, the elementary portion of the school was ready to be opened as Sing Sing Road Elementary School.

Enrollment growth had slowed by 1975. That year, Breesport School, then housing grades K-3, was sold to a group of Baptist churches and became the Southern Tier Baptist High School. The Breesport students went to Center Street Elementary School.

In 1983, Broad Street Elementary School was closed and rented to the Schuyler-Chemung-Tioga BOCES for one of their programs. Today, the building is rented to various community organizations.

In 1987, ninth-graders became high-schoolers as the Junior High East building became part of the High School with the addition of a link between the schools. In 1997, the district's kindergarten program became full-day, and in 1998, the High School implemented block scheduling, in which students take four courses in each of two semesters per year. 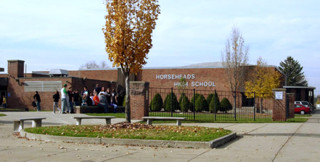 In 2000, district voters approved a multi-year $18.3 million capital project to upgrade and enhance district facilities. The project also included the construction of a state-of-the-art athletic facility at the school complex on Sing Sing Road. The facility includes an indoor/outdoor chipping and putting green, funded by the First Tee Project of Corning and the LPGA.

In 2002, the district reconfigured its grade structure. The elementary school on Sing Sing Road is now Horseheads Intermediate School, housing all of the district's fifth- and sixth-graders. It opened in 2003. The remaining four elementary schools house students in grades kindergarten through four.

In 2006, voters approved a $15.3 million capital project for district-wide facilities improvements, including the renovation of the High School auditorium, boiler and window replacement to more energy-efficient models, and the installation of a district-wide wireless network.

In 2016, the district sold the Broad Street School building, which was being rented to community organizations since its closing as a school in 1983. Also in 2016, the district began Horseheads 2030: Building Our Future Now, a comprehensive project to envision the future of the district and improve upon its education and infrastructure.

In the Fall of 2017, residents approved a nearly $100 million comprehensive capital project to renovate, upgrade, and rebuild district facilities. The project includes a new state-of-the art library at the High School, upgrades to classrooms, a new outdoor facility/stadium for athletic, music, and community use, and more. Planning and design, as well as submittal to the state, began in early 2018. Construction began in the Summer of 2018 and is expected to be complete in 2022.